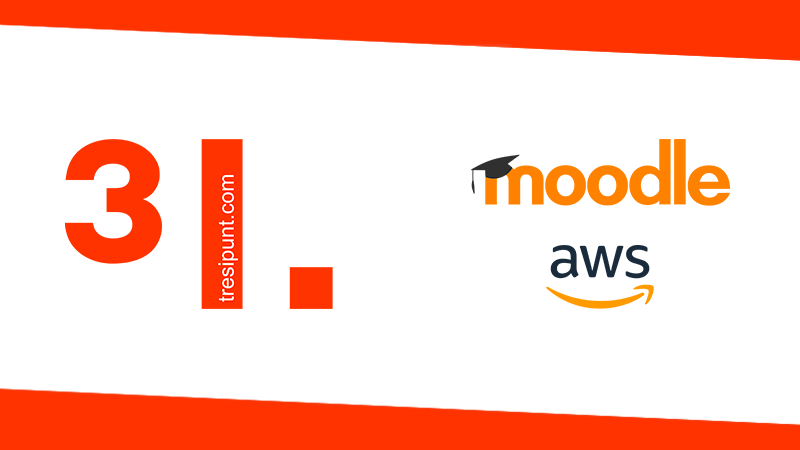 The power of Moodle with AWS, a perfect combination

From the systems department in 3ipunt, we set ourselves a challenge: to squeeze all the power of Moodle in the best cloud available. In this blog post we will explain what this way was about.

So far we had worked with Moodle on monolithic servers, when we focused on configuring the system software to guarantee the service and take advantage of the resources we had on the servers.

With AWS, the limitation of resources or storage diminished attention and we were able to focus on availability, flexibility and user experience.

The first challenge was how to make Moodle scalable, depending on how many users were connected, and the disk had to be as flexible as possible so as not to have to stop the platform for any extension.

Another step we did was to redesign the network. We proposed a network where the infrastructure was not accessible from the outside, only through a bridge server, so that with this we were guaranteeing access security.

Another thing that we were concerned about was that the services that Moodle needs were as restrictive as possible, so we created a policy in which the services would only communicate with other services. This gave us the network security we were looking for.

The next step was to make the space of the data stored in Moodle more flexible. We valued the different possibilities that AWS provided us and we opted for the flexible and shared disk service, so that all servers, if there were more than one, could have access to it, making data transparent between them.

When everything was built, we tested it. During the tests we noticed a problem: the requirements were accomplished but the platform was slower than we had initially planned.

Therefore, we had to find a way to make the platform more agile and ensure data was read quickly and dynamically.

After testing various disk and performance alternatives, we found the solution with cache. With the AWS cache systems we fulfilled our requirements and gave the platform the agility and user experience that we initially intended to offer.

Currently, we are improving code deployment and container migration to bring Moodle and AWS to a new dimension.

Calculating the budget for auto scalable projects can be expensive, so at 3ipunt we optimize AWS resources to guarantee the best performance at the lowest cost for our customers, fully adapting to their needs at all times. Wanna join us?

This website uses cookies to improve your experience while you navigate through the website. Out of these cookies, the cookies that are categorized as necessary are stored on your browser as they are essential for the working of basic functionalities of the website. We also use third-party cookies that help us analyze and understand how you use this website. These cookies will be stored in your browser only with your consent. You also have the option to opt-out of these cookies. But opting out of some of these cookies may have an effect on your browsing experience.
Necessary Always Enabled
Necessary cookies are absolutely essential for the website to function properly. This category only includes cookies that ensures basic functionalities and security features of the website. These cookies do not store any personal information.
Non-necessary
Any cookies that may not be particularly necessary for the website to function and is used specifically to collect user personal data via analytics, ads, other embedded contents are termed as non-necessary cookies. It is mandatory to procure user consent prior to running these cookies on your website.
SAVE & ACCEPT